One year I was responsible for a children’s group meeting after school once a week. One of the participants was a five or six year old whose mother didn’t bring him. The school bus dropped him off. He lived with his mother in a run-down trailer about 10 miles away so I brought him home after the meeting. Because he was so little and vulnerable, Sharon would accompany us. One of our rides home with him, we started singing in the car. Sharon and I came up with “John Jacob Jingleheimer Schmidt” and “If You’re Happy, and You Know It, Clap Your Hands”. We thought it wasn’t fair for Sharon and me to pick all the songs so we asked him if he knew any songs he could sing. It turned out he did. He began to sing a song that went (in his version): “Wookin’ for wove in all the wrong pwaces, wookin’ for wove.” I asked him where he heard the song, and he said on the radio. It was sung by a fellow called Johnny Lee. He taught it to us, and to the day of her death, Sharon and I would sing it when the time seemed appropriate. 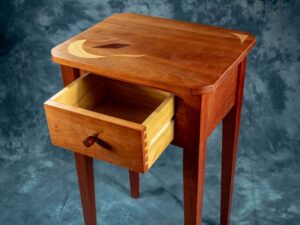 Today, our theme is why in design. This is as good a place in my work to anchor the discussion of motivation as any other. What can a positive experience in design bring to us? Are we wookin’ for wove in all the wrong pwaces? Most of us, especially myself, do not move the earth with our conceptions. There are precious few Picassos, Frank Lloyd Wrights, or Sam Maloofs. We cannot expect to receive plaudits from others for what we do. My brother is a fairly accomplished musician who has done a lot of teaching. He told me once that every kid he ever taught wanted to be able to stand on stage after the first lesson and call out something like, “Thank you, Minneapolis!”

For most of us, a successful design extends our lives a little longer and a little wider. We are actualizing ourselves no matter who it pleases or doesn’t please. Therefore, I don’t want to get caught wooking for wove in all the wrong pwaces.