Up in the Air

This week marks the passing of one of my all-time heroes: Bill Russell. I came to know about Mr. Russell during the years he played for the Boston Celtics. He was a force of nature. The games he played against Wilt Chamberlain were true tests of courage and fortitude.

After the end of his playing days (he coached for a few more years) I was working as a summer intern at the Cambridge YMCA. My job in part was handing out towels as people came in. On the wall next to the counter at which I worked was a poster showing Mr. Russell blocking a layup. This wasn’t much in itself, but Mr. Russell was stretched over another Celtic, John Havlicek, so that his knee was on Havlicek’s shoulder and his hand was blocking the ball. John Havlicek was a guard-forward and so not a small man. He was also famous for never giving up, but at this time he was simply beaten. Mr. Russell who had come down the court behind him was not, however.

What has struck me about the picture is that there was just one space into which Mr. Russell had to get himself to do his job, and he did it. So much of my working life has been an attempt to emulate this ethic. My time is not my own. I care for a family and must be alert to their needs as they show themselves. There have been times when I literally had 15 minutes to work in the shop before the next thing took precedence. I took that 15 minutes. No one will ever take a picture of me stretching over another person to get my job done, but, if I can set up for a part of a process for a piece of furniture or perform some small task, I do.

So much of my life is up in the air. I try to answer the bell every morning and do what can be done. That’s where progress originates. That’s where the chairs you see are made. 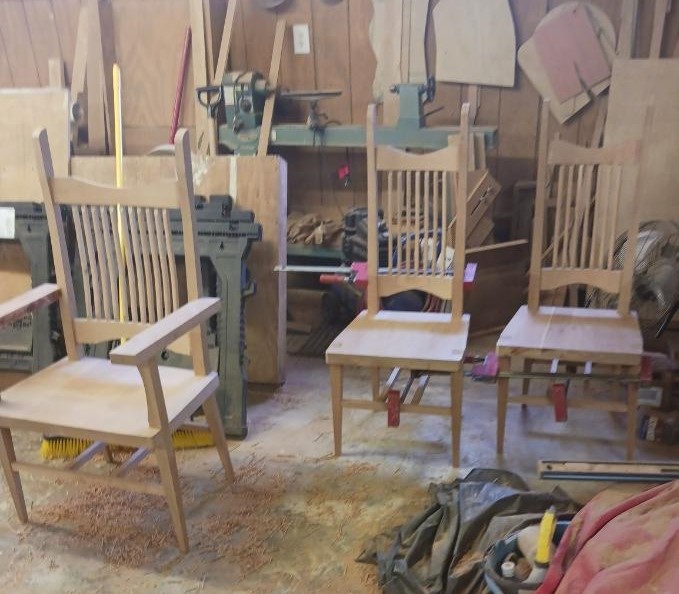 The woods always look different at night…as if the daytime trees and flowers and stones had gone to bed and sent slightly more ominous versions of themselves to take their places.