The Eagle Has Landed

This week, we feature a chip carving by my son, Joe. An eagle to commemorate the 4th of July. 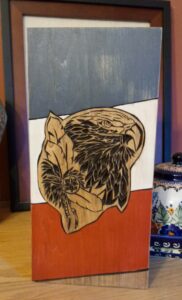 Benjamin Franklin suggested that the turkey would make a good national bird. Those of us who have grown up only knowing the domesticated version of this bird find the suggestion ludicrous, but anyone who has tried to hunt a wild turkey knows how difficult they are to capture or kill. As it turned out, however, the eagle won.

Joe and I saw an eagle hunting once in Wisconsin. The lakes where we were staying with some friends were very close together. Our guests were hopeful that we would get a sense of the speed the Native Americans were able to achieve by walking from one lake to another. The native peoples apparently had long canoes that took ten or more riders. They would cross one lake and then run between lakes to relaunch to begin the cycle again.

The day was a crystal clear one. Across the lake from us was a hardwood forest, thick and green. When I first saw the bird, I honestly thought it was a man flying because of its size. The eagle glided across the lake at about 10 feet. Suddenly it dove and brought up a huge fish that our friends later told us was a Walleye. The fish was twisting in the talons of the eagle, but to no avail as the bird took his quarry up into the trees of the forest across the lake.

I told Joe that we could have lived our whole lives without ever seeing such a thing. It gave us both a sense of the glory and wonder of this bird and cemented in us the belief that it should be our nation’s emblem.

Bourgeois Furniture will be at Old Town Vibes in Winchester, Virginia for the next three Saturdays, starting on the 10th. This is a festival where they invite local artisans to display and sell works on the streets of the walking mall in downtown Winchester.