It has always amazed me to see how great blessings enter our lives. I first heard the word ‘shaker’ on the show Leave It to Beaver. Beaver’s dad, Ward, grew up in Shaker Heights. I don’t know if it was ever mentioned that it was in Ohio or if I just imagined it was so. Also, I assumed that it was on some kind of promontory (hence the name Heights).

Years rolled by and I encountered the name, Shaker, again in studying American and religious history. It turned out, or so my teachers said, that this was a designation for a religious offshoot that developed in 19th century America and lasted up into the 20th century. They lived apart from the more usual society in insulated groups, not isolated because they traded with those on the outside. They subsisted by farming and mass-producing trade goods. Their name comes, apparently, from the gyrations they performed during their religious rituals.

Since the demise of the sect, we have been inundated with books about their beliefs, history, and (mostly) crafts. The Shaker style is well established in American furniture with its less is more overall design and clean lines. When I first began making tables, I sought the same aspects without consciously making a connection to the Shaker tradition. I went back and looked, however, when so many people began making the assumption that I was moving in a Shaker direction. 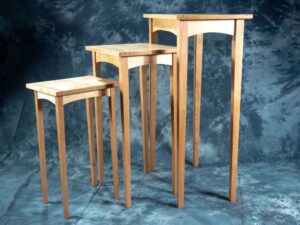 featured this week. Looking closely, you can see that I’m not a converted Shaker. I’m just gyrating to my own beat.

Species: maple with a small cherry inlay across the top of the table

In the woods we return to reason and faith.