Several years ago I was waiting for my grandson to get off his school bus when a truck parked across the street and a man who had met me – I did not remember him – a couple of years previous got out and called my name. He had some walnut he wanted me to look at in a lumber yard south of here. I wasn’t too excited about the possibility because he was a timber appraiser and seller. I had come to distrust such people. They seemed to me to be very sharp dealers, and I am not skilled enough to guard myself.

Anyway, he had some walnut strips (from 2” to 4” wide and anywhere from 6’ to 8’ in length) metal banded in the lot associated with a sawmill near Winchester. I took one look and told him I’d pay for it as though it were firewood and offered him $200. He took it. I cut the bands and there was a lot of rot and warping, but I estimated about ½ of it was good. That worked out to be around 1750 board feet. Considering that the price at a planning mill would be around $7 per board foot, I’d spent $200 on a possible $12000 value. The wood had to be worked carefully, but I was okay with that.

I still have quite a bit of it in my wood racks. I have used it for piece work. One of the first projects was a set of easels which have been a good seller and gift for several years. I have made that $200 over and over again on these easels. 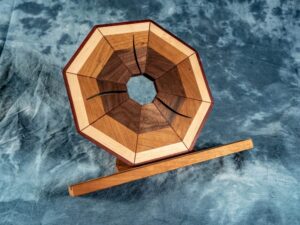 It has shown me that Providence is not just a place in Rhode Island. These are made with other scraps (cherry, maple and bloodwood) in an octagonal shape with a cherry support and shelf attached.