A wolf howling at the moon is an old theme in my memory. For instance, I can remember K.D. Lang singing a song about why the wolf howls at a get together around the winter Olympics in Western Canada many years ago.

In our collection of work, however, this piece represents a blending of the old and new. 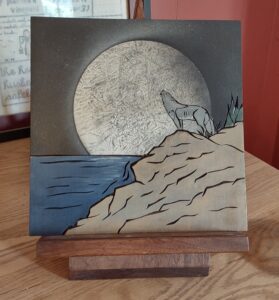 The new is represented by the techniques used by my son in his chip carving. He has been experimenting with the use of colors and different finishes to achieve some startling effects.

For instance, one you might have missed is his ability to pick up the reflection of the moon on the water. Another is the shading and distressing of the moon. With these, he is able to bring us closer and farther away from the overall picture.

We are moved at once toward the wolf’s muse and away from its call. In a way, we move into the mind and heart of the wolf, not in words (as in K.D.’s song), but in pictorial affects which somehow allow our own reactions to speak for themselves.

I look forward to where these techniques and visions will lead my son as he depicts various scenes in nature and in the universe at large in the future, as he investigates the new and the old.

The woods always look different at night…as if the daytime trees and flowers and stones had gone to bed and sent slightly more ominous versions of themselves to take their places.