The picture you see today is a result of a collaboration between myself and the customer who is having this done. It is to become (actually already has become) an inlay at the corner of a dining room table. The opposing corner has a moon with a cloud across it. I had an original work that was meant to be an abstract of a bird and the sea. There was a fish in it and the red (water) curled up one side in a kind of wave. 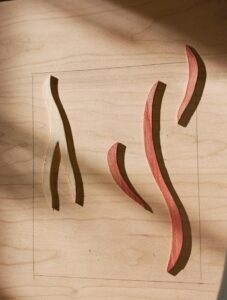 The customer began asking if we could move this or that. It was no problem because nothing had been inlaid yet. It was just sitting on top of the wood. She painstakingly worked with me until we had rearranged the pieces like they are now. We tried moving the big piece over and back, tried the little ones first above and then below, over and back. It took us pretty close to an hour before we finally arrived at what you see before you. It took a little longer because I am still in the stone age with my digital skills. She was patient with me, though, and we finished.

The whole process reminded me of an experience a friend of mine had when his daughter left her braces on the lunch table at school. She came home without them, and he asked her what happened to them. She had no idea. This led him to the school. The lunch room ladies were just finishing up their day’s work. They said that, because kids volunteered to clean the tables, whatever was on them went into the trash. It turned out that they had had sloppy joes for lunch that day. It was a warm afternoon in Arkansas, and my friend was given a sauce pan and shown 3 fifty five gallon drums with the remains of the lunch in them. They provided him with a fourth, and he proceeded to scoop out the contents of the first one with the pan. His daughter wanted to go home. He helped her to understand that that shot was not on the board. She was going to stand there with the smell and mess until those braces were found or they had gone through all the leftover food. He got down through the first drum and two-thirds through the second when the braces were found.

The point of this story is not that the process to this and many designs is arduous and unpleasant. Some are, but every time the course is a step-by-step process. I cannot remember a design work I’ve been part of that ever emerged full-blown out of my head. You just have to keep looking for the braces.

What they were thinking was that big pieces of lumber like this should be used to make tables or chairs or to repair a house or make window frames; wood like this was hard to find.