One very humid day this past week with the temperature into the nineties, I was hand-sanding some chair parts (what else?) when I thought I heard some squeaking. I looked around and located the sound from under the end of a pile of wood in a rack. There was a black cat that had been roaming our property with five kittens. They were just starting to move around and were squalling. I put some food and water out for them, and since then the hilarity has ensued, as they say. 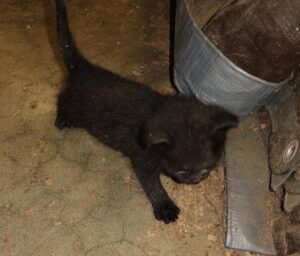 That’s the thing about life, isn’t it? It happens whether you expect it, want it, or not. I once knew a woman, call her Mary, who when she was 14 got a large part of her head shot away while she and her brother were playing quick draw with a real 45 pistol. They lived with their parents way out in the delta of Arkansas maybe 65 miles from Memphis. They took her to the nearest doctor’s office with her head wrapped in a tea towel. The doctor told them that they couldn’t do anything for her. She’d have to go to Memphis. The parents put her in the back of the car and made the trip to the hospital. She was in the ICU for months.

At one point, her father got into an elevator with the doctor supervising her case, and the doctor told him to let her go. His point of view was that she wasn’t coming out of this trauma. Her father said, “We’ll take home what we can.”

After the hospital, she returned home to sit in a wheelchair for six years, each day being wheeled out to sit in front of the T.V. She was fed, bathed, and dressed. One day someone noticed that her eyes were moving with the shape changes on the T.V. They got someone in to look at her more closely, and it was decided to start her out on some verbal communication. She was my age when I met her (38), and the first time I saw her she was moving a walker into the sanctuary of our church. We developed a friendship, and Sharon and I took her out to help deliver cookies at Christmas. She also came to an all-nighter for Halloween and watched the horror movies.

When I left that church, I believe she had started up a relationship (kind of a pen-pal affair) with a man who was definitely interested in her.

So, guess what? It’s finally not up to us whether life goes on or not (or in what shape). We just take home what we can.