Although my childhood was more of a wreckage than an upbringing, I have always counted myself a person who has received many gifts along the way. Opportunities have come my way unbidden.

I can still remember sitting in a waiting area at Harvard University, outside the office and meeting room where they were putting the new class of 1969 together. This was in my senior year of high school in 1965. I can remember the man coming out and telling me that they had decided to give me a place in the class of 1969 with a full scholarship. I still am not sure why they chose me. Over the years, however, the why became less important than that they had made the choice.

They had seen something in me that no one else did. Through this opportunity I received others: the chance to learn from the most learned men and women that I’d ever met; the chance to be exposed to influences that sparked my mind to heights it would not have reached without them; an understanding that I had a gift for languages as I easily read French, Latin, Hebrew and Greek.

I have to say that I did not enjoy college. I was a fish out of water. Everyone around me had a better upbringing and were more academically prepared for what lay ahead. I did scratch by, though, and came out of college with a B.A. in history and a wife who would share my life for the next (so far) 52 years. 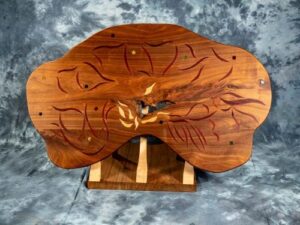 The picture for today is of the Tree of Life. When I originally conceived this piece, it was a tree from the outside with a trunk. It occurred to me that we never see the tree of life this way so I decided to depict it as it might be seen through the branches. The red lines show the Hebrew words “Thou shall not kill. I am the Lord, thy God.” In the negative space in the middle, I see a bird landing in the branches and the maple inlay shows the sparks it shoots off in landing. There are also 12 pieces of colored glass scattered around. I made this in the part of a winter one year that was too cold for me to work in my shop, and I constructed it on the dining room table.

There is no price on this piece because it is not for sale.

I just hope you will accept it as the gift it has been for me.

One impulse from a vernal wood
May teach you more of man,
Of moral evil and of good,
Than all the sages can.