From the picture for this post, you can see that the chairs are coming together. What you see are two captain’s chairs and one side chair. These chairs definitely come with some assembly required (for me, not for you). This is the culmination of seeing the design in my head after speaking with the person who has ordered them, getting the lumber, sizing it, shaping and drilling it, and sanding it. 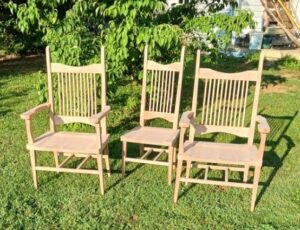 Getting these things together can be a trial if you don’t follow a couple of steps. First, I have had to develop the pieces over time so that they are the same as all the other corresponding pieces. This is just a function of my overall design. Next, they have to be dry-fitted (no glue) to make sure everything goes smoothly when the icky stuff is handled. I have skipped this step before and ended up with a mess and two-thirds. Third, I try to follow the rule that says nothing should be forced together. It may be a little snug, but there needs to be some room for the glue where you are using it. Forcing distorts the wood and may actually break a piece.

Really, it’s like relationships between people. You ease in, not forcing (at least that’s my approach). Once I had to speak to a bunch of young women. They were between 13 and 17. They wanted to shock me so they asked me why the church wouldn’t let them have intimacy (they used the other word) with boys. I asked them what they did when they first met strangers that they thought were cute or whatever. Did they take off their shirts and underwear right away? They got all mad at me and said they couldn’t believe I might think such a thing. I said what I always say: simmer down. I was only trying to illustrate why the church counsels against intimacy outside of marriage. It’s to give a person a chance to get to know someone else and make an actual real-world decision about them. This is one of the deepest things we do with one another. We don’t need to be shooting in the dark, forcing things, and making distortions. We want to get it together.