From The Mists Of Time

Many years ago—12 at least—an artisan couple in West Virginia selling spoons hand over fist in Tamarack came into my view. I was interested in how they had begun. It turns out that they had lost their jobs in coal mining and had morphed into spoon makers out of necessity.

Here I was looking for something that would sell also and facing the same necessity. My wife suggested easels. I got to thinking and thought about the picture frames with the light in the top that hangs out and illuminates the picture. This led me to the pointed shape and an inlay. At first, they were triangular because the only way I could think to keep them erect was with a leg that was fastened up the back. As time went on, I thought of the spline (a piece of wood between the body of the easel and a stand) as technology that allowed me to shape the easels. I was also able to skip the leg which was a time consuming thing. 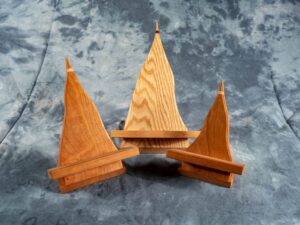 Now I have a product that has sold well and can be made out of scrap. The construction time is minimal as long as I make several at a time. Also, people remember me for the easels and come back to get more. They are useful, interestingly shaped (or so say the customers), economic and artistic when not being used for any purpose. I’ve also had people who bought them for Christmas presents en masse.

I’ve got a new batch ready and will displaying them at Berkeley Art Works on Queen Street in Martinsburg, WV. They will be featured in my contribution to St. Nick’s Market which begins the Wednesday before Thanksgiving at the Art Works. They are made of Oak, Cherry, Walnut or Maple with contrasting inlays at the top. They are priced at (large – 12”x6”) $20, (medium — 10”x5”) $17.50 and (small — 8”x4”) $15.00. They include a shelf with a groove in it for a plate or art piece. And I’m happy to ship them.

Nothing is more beautiful than the loveliness of the woods before sunrise.